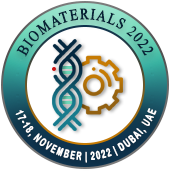 Theme: Applications of Leading Trends in the Field of Biomaterials and Biomedical Engineering

The American university in Cairo, Egypt

Tarek Madkour is an award-winning chemistry professor, a Fulbright scholar and a pioneer in the research area of computational modeling of polymers. He obtained his PhD from University of Cincinnati, OHIO, USA under the supervision of Professor James E. Mark, a distinguished research professor and a member of Nobel Laureate P. J. Flory’s research group. Madkour was awarded the Fulbright research scholar award in 1996 supported by both the Fulbright organization and the United States Air Force. He has been awarded the Harry M. Showman Award in chemistry from Jordan in recognition for his pioneering research regarding computational modeling and simulation in the area of polymer chemistry in the Middle East. He has been also awarded the Polymer Society of Japan Award and the State of Egypt Award in chemistry. Madkour has successfully secured research fellowships including the U.S. peace fellowship and a supreme council research fellowship from the Catholic University of Leuven (also currently known as the University of Leuven) in Belgium. He has over 55 international peer-reviewed publications and has delivered presentations in more than 14 international conferences worldwide. He has supervised eight graduate-level theses and secured funding for over nine major research grants as the primary research investigator.
After completing his PhD, Madkour finished his postdoctoral research on the modeling and simulation of gas diffusion through polymers supported by the U.S. Environmental Protection Agency. In 1993, Madkour returned to Helwan University in Egypt as a lecturer of physical chemistry and spent three years there establishing the polymer modeling and simulation research lab at the Faculty of Science. In 1996, Madkour traveled once again to the United States on the Fulbright research scholar award where he spent over six months researching and delivering a graduate-level course on polymer simulation. In 1997, Madkour joined the ICI-Europe, a leading British chemical industry, as a senior research scientist, where he helped to establish the molecular modeling and simulation research facility in the organization's research and development center in Belgium. In 2001, Madkour returned to academia as a visiting professor of physical chemistry of polymers at the Catholic University of Leuven, and in 2002, joined the United Arab Emirates University as an associate professor of physical chemistry of polymers and as the chair of the Department of Chemistry. In 2005, Madkour was recruited by the American University (AUC) in Washington, D.C. as a member of the founding team of AU's new campus in West Africa. Following his work with AU, Madkour began working as the director of academic planning on a collaborative EU-Turkish project in 2009, which sought to establish a new Turkish University. In 2010, Madkour accepted a position at Taibah University in Saudi Arabia prior to joining AUC as a professor of physical chemistry of polymers in 2011.
Madkour is a member of several societies and groups, including the American Chemical Society, Rubber Division, American Chemical Society; the American Physical Society; and the Belgian Polymer Group. Additionally, he is a member and reviewer for the Fulbright Association. Madkour is also a European Commission consultant for the chemical and educational development sectors since 2002.

Drop us an email for Program enquiry
biomaterials@scientexconferences.com